The Basilica of the Sacred Heart of Paris is located at the top of the Butte Montmartre. The Basilique is one the most picturesque Parisian sites and the highest point in the city, overlooking Paris from 80 metres high.

The Basilique du Sacré-Cœur was built after the disastrous defeat of the French against the Prussians in 1870. A Catholic group raised funds thanks to public donations to erect a church on top of Montmartre’s hill. 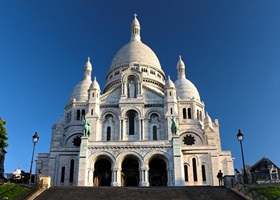 With its neo Roman-Byzantine style, the Basilique contrasts with churches from the Middle Ages with a gothic architecture, such as Notre Dame de Paris. It is derivative of churches like Hagia Sophia in Constantinople or San Marco in Venice.

The first stones of the Basilique du Sacré-Cœur were set in 1876. The façade’s travertine outter stone was quarried from Souppes, in Seine et Marne, near Paris, and exudes calcite, which means it remains white even if it rains.

The Basilique du Sacré-Coeur was finished in 1914 and consecrated in 1919 which attracted and still attracts many pilgrims and tourists.

The Basilique is 85 metres wide and 35 metres long. The dome is 55 metres high and its diametre is 13 metres, which makes the whole structure culminate at 83 metres high.

The top of the dome is open to tourists and offers a spectacular panoramic view on Paris. Two-hundred metres high, this dome offers the second highest point of view in the city after the Eiffel Tower.

How to get there: 35 Rue du Chevalier de la Barre, 75018 Paris.
Métro line 2 Station "Anvers" or
Métro line 12 "Abbesses", and then you can either take the funiculaire or the stairs;
Bus line: Montmartrobus.