The Château de Versailles is a palace that symbolized the system of absolute monarchy and the peak of art in France under King Louis XIV’s reign. It was the centre of political power in France from 1682 until the French revolution.

The construction of the palace started in the 17th century. Louis XIV wanted to get away from the people and gather the power in one place. By doing so, he controled the noblemen and avoided a second Fronde (revolution of the noblemen and women that happened between 1648 and 1653). In 1661, Le Nôtre, architect and landscaper of the king, started embellishing the Jardins for the fêtes (parties) organized by Louis XIV. 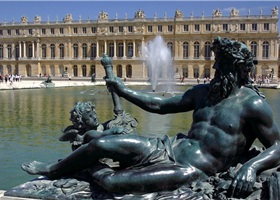 In 1668 architect Louis Le Vau had stone walls built around what used to be a small hunting lodge built in 1624 for Louis XIII, Louis XIV’s father.

In 1687, Mansard designed the Grand Trianon. It constitutes the most refined building in the whole domain. "A little pink marble and porphyry palace with delightful gardens" is how Mansard described it. It was built on the ground of the "Trianon de Porcelaine" which was ordered a few years earlier for Louis XIV’s loving encounters with Madame de Montespan.

Under his reign, King Louis XV had the whole place redecorated to mark his time. In 1762, he ordered the Petit Trianon, of neo-classical style, to architect Gabriel (see picture below, on the right). The four sides are different. The most sumptuous side faces the French Garden; it is decorated with columns inspired by the ancient temples. The north-facing side is very simple.

In 1789, the French revolution (see painting below) put an end to a century of kings living there, and all the works of art were sent to the Louvre museum. Louis Philippe (1773-1850), the last king of France, transformed the palace under his reign(1830-1848) into a museum dedicated to French history including Napoléon’s Empire and the fall of monarchy.

After him, Napoléon III (1852-1870) finished the museum, which was eventually closed with the war against Prussia (1870-1871). In January 1871, the German Empire was proclaimed in the Galerie des Glaces (see picture above, on the left). 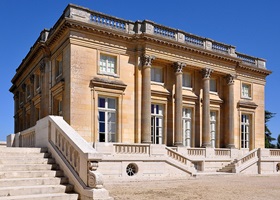 The Assemblée Nationale set their meetings there, as the ministres did during the period of the Commune. The Third Republic was proclaimed there on January 30th 1875 which made for a powerful symbol against absolutism.

At the end of the 19th century, Pierre de Nolhac became a curator of the museum and tried to restore the original appearance of the palace before the Revolution. He reorganized all the collections and what Louis Philippe had done in the museum. He aimed to raise awareness and created a donor’s group called the Friends of Versailles in 1907.

Since 1914, the French state and many donors have helped renovating the palace, making it more beautiful than ever.