The story of the Église du Val-de-Grâce began in 1621, when Louis XIII gave his authorization for a Benedictine abbey to be built in Paris. It was supposed to replace the one in Bièvres, a city located 15 km from the capital, which was subject to extreme humidity and dryness.

The nuns who lived in the "maison du petit Bourbon" (house of the little Bourbon) waited until 1624 for the first stone of their new covent to be set on a ground near the hotel they were staying in. 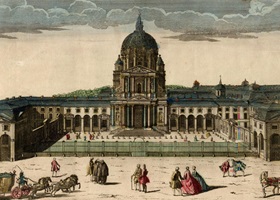 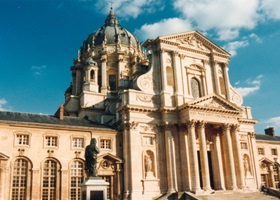 Queen Ann of Austria (1601-1666), who had been barren for years, frequently stayed there and made a vow to God to erect a beautiful church if He gave her a son. Louis XIV was born in 1638.

The queen became a regent after Richelieu and Louis XIII died, so she decided to make her promise a reality.

On April 1st 1645, the king, who was 6 years-old at the time, settled the first symbolic stone of the Val-de-Grâce church.

The dome was finalized in 1663. It was painted by Pierre Mignard (1612-1695), famous for decorating the Château de Versailles, and having two paintings at the Louvre. The dome’s proportions were modelled after Rome’s Saint Peter basilica.

The inner and outer sculptures were by Philippe de Buyster, who sculpted "Le poème satyrique" in the Versailles gardens, and by the brothers Anguier, authors of the sculptures at the Porte Saint Denis. 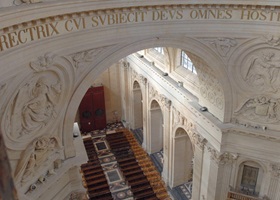 In 1669, the latin-cross-shaped church was finally built, 24 years after construction began. It was consecrated 40 years later, in 1710.

In 1790, the abbey was closed because of the French revolution. It was saved from destruction as a work of architecture.

In 1793, the Convention issued a decree which made the monumental building a military hospital.

The canopy, designed by Gabriel Le Duc, and the Nativity sculpture by Michel Anguier, on the altar of the church definitely make this place unique.

Still present even after the church became a hospital, the Nativity group is actually a copy of the original one in Église Saint-Roch (1st arrondissement in Paris), which was ordered by Napoléon III.

Today, the Val-de-Grâce is still a military hospital. Since 1979, the actual hospital is located where the benedict nun’s kitchen garden used to be.