The Eiffel Tower was built for the Universal exhibition of Paris in 1889, to celebrate the centenary of the French Revolution. The monument is a symbol of power and prestige for the rest of the world.

Originally called the “300-meters high tower”, it was designed by Maurice Koechlin and built by Gustave Eiffel.

The construction of the Eiffel Tower started on January 28th 1887. The foundations were built by hand with shovels in five months.

The four feet and the first floor, 57-meters high and 4 415 m2 large, were built with scaffoldings and water jacks, which made each foot move when necessary.

The first floor rises at 115 meters high and is 1430 m2. It was built with huge cranes. The pieces were pre-made in the Eiffel workshop in Levallois and riveted directly on the monument.

The second floor culminates at 276 meters and offers a 250-m2 observatory.

After colossal works that lasted for two years, 2 months and 5 days, and a 7,8 million golden francs cost, the summit was rigged up the same day of the inauguration, on March 31st 1889.

Fifty engineers and drawers worked on more than 5,300 sketches. 250 workers – more than 100 in the workshop and 132 on the construction site – pre-made and assembled more than 18,000 iron pieces.

The metal framework of the Eiffel Tower weighed 7,3 tons and was 312 meters high during the inauguration and is now 324 meters high, because of the radio and television antennas.

Originally, the tower was supposed to be destroyed after a twenty-year lease, but Gustave Eiffel did everything he could to prevent that from happening. He explained that the tower was a weather and astronomic center, physics experiments center, and an observation and communication post, or a place to study winds.

The Eiffel tower’s existence was legitimized by the radio and television waves that are broadcast from the summit. 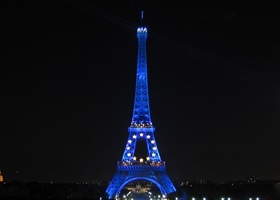 Despite the 1710 stairs to the top, almost 1,9 million people came to visit the tower the first year, helped by the elevators that were built in June 1889.

250,000 visitors visited the monument in average during the Universal Exhibition, but the numbers fell to 150,000 visitors / year before the First World War.

Why was the Eiffel Tower so important in the 19th century?
- It was supposed to make the public forget the outrage of the defeat against Prussia in 1870.
- It was supposed to symbolize French power and genius. With 312 meters high, it was the highest construction in the world for 41 years, only surpassed by the 319 meters Chrysler Building in 1930, in New York. 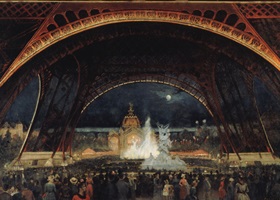 Notes:
The Eiffel Tower lights up every hour for five minutes, once it’s nightfall until 1am. At 1 am, a sparkling light replaces the golden light of the tower for ten minutes.
The sparkles are possible thanks to 20,000 light bulbs (5,000 on each side).
The top now reaches 324 meters thanks to 120 antennas.
The tower is repainted every 7 years with 60 tons of paint.