The Moulin Rouge is a cabaret which opened its doors on October 6th 1889, at the bottom of Montmartre. It was a unique period of French history, marked by carefreeness, frivolity and joie de vivre.

On the Place Blanche, the Cabaret du Moulin Rouge was created when people wanted to have fun, between the two World Wars, such as many other places in Montmartre (Chat-Noir or Folies-Bergères).

At the end of the 19th century, industrial progress gave everyone hope to live better. In a cultural context that was particularly rich, crowds came over to discover this extravagant place.

The Moulin Rouge is famous for its huge dancefloor and its many mirrors. Its garden was known for its big elephant statue in stucco which was designed for the Universal Exhibition of 1889. The ladies loved to go for a ride on the donkeys out there, but it’s in the galleries where people really had fun.

The building is crowned with a huge red windmill which the cabaret is named after. The hosts, Joseph Oller and Charles Zidler, didn’t know it would become such an important symbol of Paris. 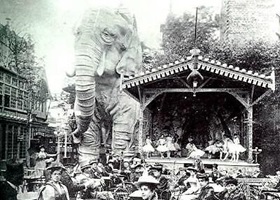 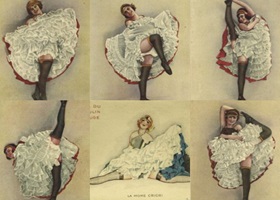 The owners knicknamed their music-hall the "First Palace of Women", and bet on its success by proclaiming to everyone that the Moulin Rouge would become the greatest temple of music and dance of all times.

French Cancan is what really attracted crowds. Invented in London in 1861, inspired by Quadrille (an acrobatic dance with a mean rythm, in titillating costumes), Offenbach’s compositions gave Cancan its own sound.

With twenty legs up in the air, defying gravity, the crazy atmosphere soon spreaded to the public, where aristocrats and thugs, nobility and poverty, partied together in joy.

Postimpressionist Toulouse-Lautrec (1864-1901) was a frequent visitor, and painted a portrait of La Goulue, a famous Moulin Rouge dancer, which is now at the Museum of Modern Art in NYC. He also designed a poster, which is known for its Art-Nouveau style (see below). 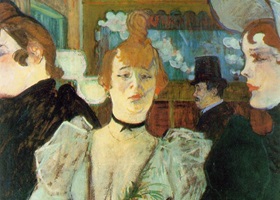 For more than 60 years, many people ran the Cabaret. The Moulin Rouge also had to face historical events (the two World Wars) and many different fashions.

When French Cancan ran out of style, the Moulin Rouge welcomed on its stage operetta dancers on Offenbach music, American Broadway dancers, or famous singers, such as Edith Piaf.

In 1951, Georges France bought the place and had huge works done to gave back its lustre to the Moulin.

In 1955, following the Bal Populaire traditions, Joseph and Louis Clérico started to rule the place. Kitchens were installed, which was a small revolution in itself. The "dinner and a show" was created and became a must between all the Parisian attractions. That’s when the place became famous outside of France: Elvis Presley always goes to the Moulin Rouge when in Paris.

In 1962, Jacki Clérico took over the first Cabaret of the world. The Moulin Rouge went back to being legendary and extravagant. In 1964, he had a giant fish tank built in which nude dancers move sensually under the spectators’ eyes.

In 1988, for its hundredth birthday, the Moulin Rouge welcomed many show-business stars and royalty.

Today, many French and international tourists come to Place Blanche, day and night, to see the shows or just take pictures of the famous windmill.

Sidenote: The legend has it that the name "Moulin Rouge" dates back to 1814, during the Paris Battle which has the Napoleon soldiers facing the European armies. Four miller brothers defended Montmartre against Russian forces. Three of them died, and the last one standing killed a Russian military. To get revenge, the Russians hung the miller’s body to the wings of the mill. His blood painted the building in red, thus the name "Red Windmill" (Moulin Rouge).

Visits: Free on reservation during the "Journées du Patrimoine" (a few days when everyone can visit national monuments).