The building of the Notre Dame de Paris cathedral started in 1163. Pope Alexander III set the first stone after the destruction of old cathedral Saint-Étienne, dating back from the fourth or seventh century. It had become too old and too small to welcome the ever growing population of Paris at the beginning of the twelth century.

Some excavations were led at different time periods and revealed that an old pagan temple – dating back from the beginning of our era – existed at the exact same location. It was later replaced by a huge Christian basilic with five naves. 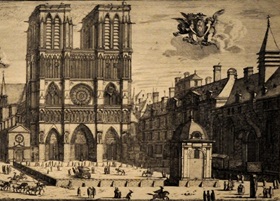 Dedicated to the Virgin Mary (Notre Dame de Paris means "Our Lady of Paris"), it was built in two centuries. Many architecture masters took part to finish this great monument until the beginning of the fourteenth century. Its final dimensions are 128 meters long, 40 meters large making for a 4800m2 surface.

During the 17th and 18th centuries, the first modifications and renovations began: a new sacristy was built, the central portal was refurbished. During the Revolution, the 13th century spire and the 28 kings’ statues of the royal gallery were torn down.

During the 19th century, Victor Hugo wrote his famous novel Notre Dame de Paris which quickly became a worldly success. In 1844, Louis-Philippe I’s government decided to restore the cathedral. The spire was rebuilt, the statues were put back in place, the murals were repainted in the side chapels, and the great organ was completely restored.

During the 20th century, there was a lively debate about whether or not to replace the stained glass. The new ones were finally finished in 1965, and they were much more colorful than they were back in the 13th century.

Between 1990 and 1992, the great organ – certainly the most famous one in the world – was entirely restored by a group of French organ masters. Around the same time period, a big cleaning campaign, which lasted for ten years, allowed us to admire since 2000 this medevial architectural jewel.

Don’t miss:
The building of the West facade in front of the esplanade started in 1200 and ended in 1250. This architectural jewel is huge: 40 meters wide, 43 meters high without the towers, 63 meters high with the towers. At the center of the facade, there is the "Virgin Gallery", a big rose of 9,60 meters of diameter was sculpted around 1225. It represents Virgin Mary’s aureola. She’s standing with baby Jesus between two angels. On their right and their left, there’s a statue of Adam and Eve. These statues were restored by Viollet-le-Duc during the 19th century.

Under the balustrade, there is a wide horizontal frieze, the gallery of kings, a row of twenty-eight statues representing twenty-eight generations of kings of Judah, descendants of Jesse and human ancestors of Mary and Jesus. This part of the facade shows that Mary, a mortal woman born of the human race, gave birth to Jesus, who was both man and God. These painted statues were added to the cathedral in the first third of the 13th century and quickly became familiar representations of the kings of France. From 1284 onwards, they were presented in this way. And this tradition would be perpetuated throughout the centuries. This is why, during the troubled time of the Revolution, these statues would be attacked and mutilated as symbols of royal despotism. In 1843, when Viollet-Le-Duc was named architects in charge of the Notre-Dame project, none of these statues remained. Viollet-Le-Duc decided to restore these statues we can view today.

On the lower level, the central portal, known as the Portal of the Last Judgement, is taller and wider than the others, was built between 1220 and 1230, soon after the two others. It represents the Last Judgement described in the Gospel according to Saint Matthew.
On the lower level, the dead come back to life and rise from their tombs. Right above, archangel Michael weigh their soul according to the life they led on earth, the love they dedicated to God and men. The chosen ones are led on the right side of the gate of heaven, and the damned ones are led to hell by a devil on the right. 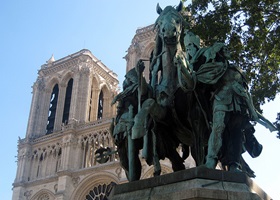 Notre Dame’s Treasury holds the sacred objects destined for the rituals of the Catholic Church (sacred vases, ornaments, lithurgical books…). It was one of the richest Treasuries of the country before the 1789 French Revolution, when it was brutally destroyed. None of those items exist anymore. It was formed again in 1804, but soon ravaged by the 1830 riots, and the archiduke’s attack in 1831.

In 1849, with the cathedral being restored and the rebuilding of the Sacristy by architect Eugène Emmanuel Viollet-le-Duc, the Treasury was made whole again. The architect created from scratch a whole collection of medieval items: copy and adaptation of medieval shapes, restoration of the Easter candlestick, or of Christ’s crown of thorns for instance.

Gargoyles were were built into the ends of the gutters to drain rainwater off the roof; since the gargoyles extend far off the side of the roof, the litres of rainwater from storms fall far from the walls to prevent damage. The chimeras are used as simple decorations. Most of them are on the facade, seated on a gallery, watching the people below and scanning all of Paris. The sculptors really used their imagination on these statues. They are animal and human figures, half-man and half-beast, grotesque, horrific, fantastic creatures with eagles’ beaks and wings, lions’ talons, serpents’ tails.

You’ll have to clim the 387 steps (there is no elevator) to the top of the South Tower. It offers such a great view of the historic centre of Paris, the Seine and the Ile de la Cité. The entrance for the visit of the tower is located outside of the cathedral, on the left-hand side of the facade, Rue du Cloître Notre-Dame.

The archaeological Crypt (open Tue.-Sun., 10am-6pm) is located under the Parvis and accessed by staircases opposite the cathedral. You’ll visit the remains of the buildings, from Antiquity to the 19th century, a statue of Charlemagne, and Point Zéro, where all French roads begin.