The Obélisque de Louxor is the oldest monument in Paris. It was sculpted in Egypt in the 13th century B.C. under Ramses II’s reign.

The pharaoh (1303-1213 B.C.) ruled his kingdom for 67 years, until he died. He had this gigantic monument built in one piece of stone to decorate Luxor’s temple, on the southeastern part of the country, on the bank of the Nile.

Méhémet Ali was vice-king in 1829 and decided to give to France one of the two obelisks of Alexandria (the others was for the British). But Jean-François Champollion (1790, 1832, first translator of the Rosetta Stone) arrived in Egypt in August 1828. He then convinced the king to give to Charles X, king of France, the obelisks of the Luxor temple, which he admired much more.

Charles X was convinced by Champollion’s enthusiasm and did everything he could to get the two columns from Luxor. The king ordered the Naval Ministery a purpose built seagoing lighter ship. 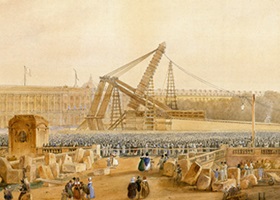 In 1830, the "Révolution de Juillet" saw king Louis-Philippe rise to the throne. The new king pursued the Luxor adventure. In April 1831, the "Luxor" ship left Toulon’s harbor, with men and material, under the naval engineer Apollinaire Lebas’ command.

A 160-horsepower steamboat named "Sphynx" towed the ship. It took them two years to make it to le Havre harbor and sail up the Seine. The Luxor obelisk was finally erected on Place de la Concorde on October 25th 1836, in front of the king and more than 200 000 Parisians. To avoid dishonor, Apollinaire Lebas stayed under the obelisk while it was erected on the square: if it had fallen down, he wouldn’t have survived.

Considering the difficulty of the shipping ,the human and financial costs, France never came back to get the second obelisk in Luxor. It was officially "given back" to Egypt in 1981, during François Mitterrand’s presidency (1916-1996).

In 1936, the Obelisk of the Place de la Concorde was officially classified as a historical monument. Since 1998, a small pyramid made of bronze and gold leaves stands on top of the obelisk. It was supposed to replace an old ornament which was stolen during invasions of Egypt in the 6th century. 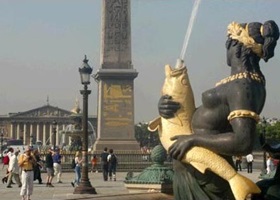 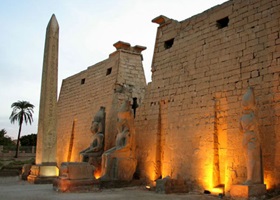 Interpretation of the Obelisk (from Musée National de la Marine)

Northern façade: Madeleine side. Ramses II is shown on his knees, giving two vases of wine to Amon-Re. Pharaoh’s cartouche: master of the two worlds, lord of the diadems. The god tells the king: "I give you perfect health. I give you life, stability and perfect happiness."

Eastern façade: Tuileries side. Same offering. Cartouche: Amon-Re, good god, master of the two worlds, son of the Sun, lord of the diadems, as eternally vivifying as the Sun, says: "I give you life, stability, perfect happiness. I give you perfect health."

Southern façade: Palais Législatif side (on the river Seine’s bank). Same offering. Cartouche: Amon-Re, good god, master of the two worlds, son of the Sun, lord of the diadems, as eternally vivifying as the Sun, says: "I give you perfect joy."

(Complete translation, historical documents… are all available at the Musée national de la Marine, on the Place de la Concorde).