The decision to build a "new opera" – which would become Opéra Garnier – started to emerge in 1858, thanks to the urbanisation plan of Paris by Emperor Napoleon III. This theatre venue was supposed to replace the Peletier venue which had become too small. The same year, baron Haussmann himself picked the place of the future building without consulting the architect.

In December 1960, a great contest gathered 171 of the most gifted architects of the world. Charles Garnier won unanimously. 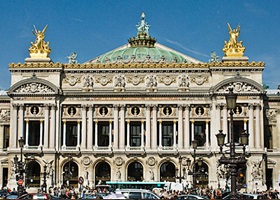 A young talent of 35 years old, he got into the Ecole des Beaux-Arts at 17, and won the Rome Architecture award at 23. When he was chosen for building the opera, he had no previous experience of this importance.

Mid 1861, Garnier was officially chosen as architect of the new opera. In August, the works started, but in November, they realized that the place chosen by Haussmann was right above a phreatic line. Steam pumps were installed and worked for days and nights on end to dry out the enormous quantity of water.

Haussmann designed the Avenue de l’Opéra to create a direct way from the Emperor’s house at the Tuileries. This street was made as large as possible in order to avoid traffic. Garnier also created a protected entrance on one of the sides of the theatre to avoid any attempt at the Emperor’s life. 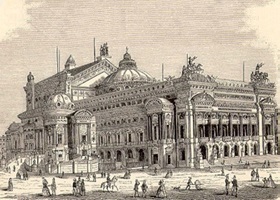 The works finished later than predicted, the Opéra Garnier finally got a roof. The works were interrupted again in 1870 during the Paris siege, caused by a ruthless war declaration against Prussia. Napoléon III was imprisoned in Sedan that same year, which rushed the fall of the Empire, and led to the declaration of the 3rd Republic on September 4th 1870.

Many questioned the future of the opera and other construction works that were ordered by the Second Empire. A year later, in October 1871, the venue Le Peletier, burned to the ground. This catastrophe relaunched the construction of the Opera Garnier.

The public administration asked Charles Garnier to finish his building as soon as possible. Huge financial, human and technical resources were used to end the works.

Surrounded by the best workers of France, the greatest painters and sculptors of the times, Garnier was immediately praised for this beautiful piece of architecture, both functional and flamboyant.

172 meters long, 124 meters wide, 56 meters high, this work of art became from then on one of the most impressive Italian-style building.