The construction of the Palais Bourbon started in 1722 on grounds bought by the Duchesse de Bourbon at the Pré-aux-Clercs — which corresponds to the Faubourg Saint-Germain nowadays.

Louise Françoise de Bourbon, daughter of Louis XIV and Madame de Montespan (married to Louis III de Bourbon-Condé), gave away part of the ground to her lover, Marquis de Lassay. He had the "Hôtel de Lassay" built around the same period, at the back of the Palais. 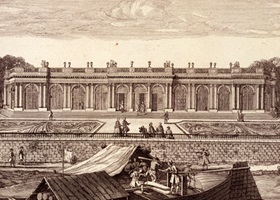 Four architects designed Palais Bourbon and Hôtel Lassay. Italian architect Lorenzo Giardini drew the sketches, while three French architects took the lead from then on: Cailleteau, Gabriel (who created several mansions on the Place Vendôme) and Aubert who finished the two buildings and conceived the interior decoration).

Finished in 1728, the Palais Bourbon is in the same architectural line as the Trianon of the Château de Versailles (built between 1687 and 1688). It was considered at the 18th century as the "greatest ornament of the city, after the royal houses".

In 1743, when the Duchess died, Louis XV bought Palais Bourbon. He gave away the house to Louis Joseph de Bourbon (Prince de Condé) in 1764.

In 1765, the Prince de Condé put architects Le Carpentier and Bellisard in charge of a massive extension, which attached Palais Bourbon to the Hôtel de Lassay, bought from the marquis’ heirs in 1768.

In 1771 and 1772, the "Petits Appartements” (small apartments), which backed the sheds and the stables, were built for one of the Prince de Condé’s daughters. It was considered by the baronne d’Oberkich “one of the most exquisite jewels of the world” when she visited it in 1784.

These long and pricey works were finished in 1788. A year later, the Prince de Condé left France to flee the Revolution.

In 1791, Palais Bourbon was declared a “national monument” and accommodated the legislative assembly, called the 500-Council, in 1795. Architects Gisors and Lecomte built a semi-circular debate room where the “grands appartements” (big apartments) used to be.

This 500 hemicycle was inaugurated in 1798 was used as it was until 1829. Nowadays, the orator’s tribune and the President’s office are the only remaining items of this time.

Between 1806 and 1810, architect Poyet built a twelve-columned porch on a thirty-stairs stylobate to replace the original façade mutilated by the 1795 works.

During the Restoration of the Monarchy (1814-1830), the Prince de Condé took back the Hôtel de Lassay, but was forced to rent Palais Bourbon to the Deputy Chamber.

In 1827, the French state bought Palais Bourbon and asked architect Jules de Joly to lead the works that would make the palais what it is today. The architect also designed the beautiful library of the Palais.

In this room, the huge tapestry represents the “school of Athens”, a well-known fresco by Raffaello in the Vatican, which evokes the Greek origins of democracy. The two statues on the sides of the tapestry give a definition of French democracy: to ensure Liberty (on the left) while respecting Public Order (on the right).

The bas-relief on the pediment of Palais Bourbon portrayed several authority figures, such as Napoléon I (sculpture of 1806) or Louis XVIII (during the Restoration of the Monarchy).

Between 1838 and 1841, Cortot’s sculpture (1787-1848) is an allegory of France, draped in typical Antiquity fashion, standing in front of her throne, with Strength and Justice, in an eminent call to create the law. The statue has never been modified. 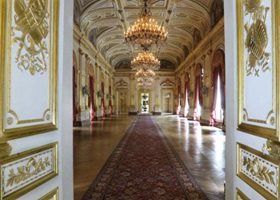 On each side of the stairs, Athena and Themis portray legislation and prudence. Athena was designed by Roland (1746-1816) and inspired by the Minerve Giustini (Vatican museum). Themis, sculpted by Houdon (1741-1828), holds a scale in his left hand, personifying justice and public order.

Information: Each one of the 577 deputies has their own numbered seat in the ranks. The political groups are gathered on the left or the right side of the President, depending on their party. They’re elected during the legislative elections for a five-year mandate.