The story of the Palais du Louvre started in the 12th century when Philippe Auguste (1165-1223) decided to build a fortress to protect himself from his enemy Plantagenêt, duke of Normandy and an ally to the English kingdom.

This fortified castle, built in 1190 in the center of Paris, was supposed to block the way into Paris and the river Seine. The wall was 78 m long (north to south), 72 m (east to west) when it was finished. 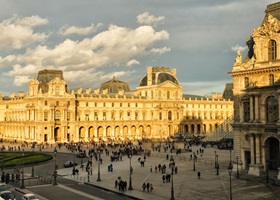 Ten circular towers protected the enclosures, one dungeon (15 m round and 30 meters high) and one ditch. This strong bastion protected the arsenal and the kings in the 13th and 14th centuries used it to jail prestigious prisoners and to store archives and the royal treasure.

Between 1230 and 1240, the “Salle Basse” (“Low Room”) was added to the construction. Its original aim is still unknown. It’s the only remaining part of the medieval Louvre.

In the middle of the 14th century, between 1358 and 1364, the capital beyond the wall that was built under Philippe Auguste’s reign. During the Hundred Years’ War (1337-1453) when France fought England, Etienne Marcel, prevost, started building a new wall that would be developed and continued by Charles V. Located inside the city, the Palais du Louvre lost its protective aspect. 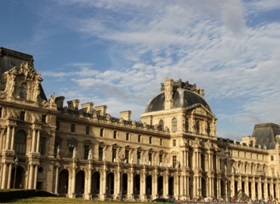 As of 1364, under Charles V’s reign, the fortified castle became a gorgeous royal residency thanks to architect Raymond du Temple who created a garden and decorated the castle.

In 1527, Francis I decided to move to Paris. To give air and light to his future castle, he had the dungeon demolished. The medieval Palais du Louvre became a Renaissance castle.

In the second half of the 16th century, the Palais du Louvre is composed of new parts, some half finished, some in ruins. Henry II’s wife, Catherine de Médicis, didn’t care for the city’s noise and smells, and had the Tuileries castle built in the west of Paris. Architect Philibert Delorme drew the plans, and finished the works in 1574.

In 1566, Charles IX started building the “Petite Galerie” (“Small Gallery”) was the starting point of a long hallway linking the Louvre to the Tuileries, following the Seine. 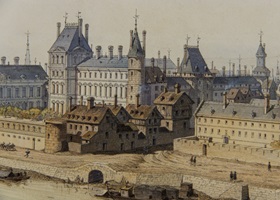 Between 1595 and 1610, Henry IV had a 450-meters-long gallery built, which directly connected the king’s apartments in the Louvre to the Tuileries, ending in the Pavillon de Flore. At the same time, they build a second floor to the “Petite Galerie” where the “Galerie des rois” (“Kings’ gallery) is.

In 1625, Louis XII decided to continue the Louvre’s construction to realize “the Grand Dessein” that his father Henry IV had imagined. He had part of the northern aisle of the medieval Louvre to make the Lescot aisle longer, in perfect symmetry, up to the same decoration.

Between 1660 and 1664, under Louis XIV, architect Louis Le Vau – who also designed the Château de Versailles – was named to finish the Louvre (Cour Carré and Cour du Sphynx): what remained of the medieval Louvre was demolished.

Between 1667 and 1672, the colonnade was built. This monumental facade, seen from the rue de Rivoli, is mainly a double-columned porch.

In 1678, Louis XIV left the Palais du Louvre and moved indefinitely to Versailles. The buildings of the Cour Carrée were left roofless for almost a century. 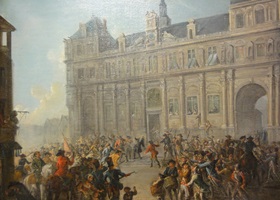 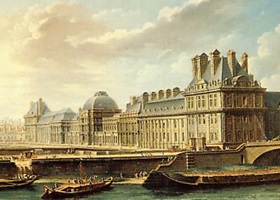 In 1756, Louis XV started the works of the castle again. The roofs were built, the aisles that had been started under Louis XIV were partially finished, and they got to demolish the buildings at the feet of the columned porch.

In 1791, after the Revolution, the Palais du Louvre became a museum. It was supposed to “assemble all the works of science and the arts”. In 1793, the museum, which was primarily destined to artists, opens its doors to the public for free every weekend. The works, mostly paintings, royal collections or immigrants’ seized goods, are exhibited in the “Salon Carré” and the “Grande Galerie”.

From the beginning of the 19th century until today, many pieces were added (Arc de Triomphe du Carrousel or the Pyramide du Louvre), were modified or enlarged (e.g.: the basement for the museum) and renovated. This wonderful work of architecture went through the centuries…

(Source of the article: official website of the Louvre)