Marie de Médicis, Henry IV’s second wife and Louis XII’s mother, decided to build the Palais du Luxembourg in 1615. She asked architect Salomon de Brosse to design it, since he had already conceived the Château de Coulommiers or the Palais des Princes in Sedan.

In 1625, even before the works were done, Marie de Médicis moved into the Palais du Luxembourg. 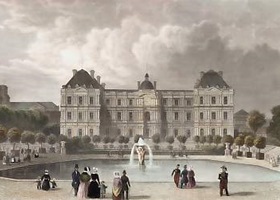 In February 1631, following a political crisis, Marie de Médicis was forced to exile in Compiègne, and never saw her palace finished, which it was, a few months later.

Between 1642 and 1694, the Palais stayed a royal house. Gaston d’Orléans (Henry IV’s third son), and then his widow and their daughters, the Princesse de Montpensier and the Duchesse de Guise, lived in the Palais. They gave it away to Louis XIV in 1694.

In 1715, the Régent Philippe d’Orléans (Louis XIII’s grand-son and Louis XIV’s nephew) inherited the Palais, but gave it to his daughters, the Duchesse de Berry and former Queen of Spain Louise Elisabeth d’Orléans.

In 1778, Louis XIV gave the Palais du Luxembourg to his brother, the future king Louis XVIII, who was chased away when the Revolution started. 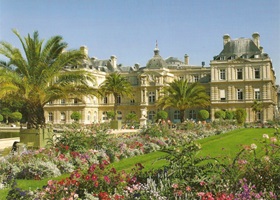 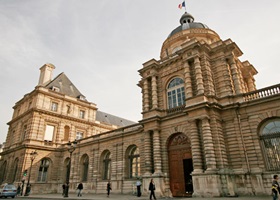 During the Revolution, the Palais served as a jail before being affected to the “Directoire”, the first French republic, in 1795.

At the end of 1799, the “Sénat conservateur” took over, and deeply changed the inner architecture until 1805. Architect Chalgrin (who also designed the Arc de Triomphe de l’Etoile) replaced the main stairs by the “Salle des Séances” of the Senate.

In 1814, the “Chambre des Pairs” took their quarter in the Palais, when the monarchy was restored.

In 1835, under the “Monarchie de Juillet” (1830-1848), the number of “Pairs de France” rose so quickly that architect Alphonse de Gisors – in charge of the restoration of the Théâtre de l’Odéon – enlarged the building to allow the construction of the Bibliothèque and the Salle des séances as it still is. 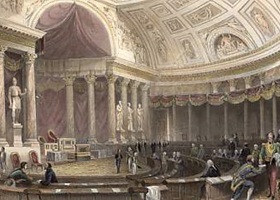 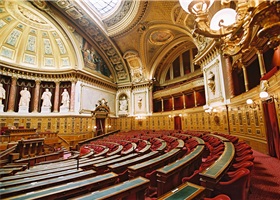 In 1852, Napoléon III asked Gisors to destroy the walls separating the three rooms from the main building to create the large gallery known today as the “salle des Conférences”.

In 1870, when the Second Empire fell, the Palais du Luxembourg was home to the Seine administration, then to the Senate of the 3rd republic in 1879.

In 1940, the Western-Luftwaffe staff took over the Palais. Between 1944 and 1958, it successively became the headquarters for the “Assemblée consultative provisoire", the High court of justice and the Republican council.

Since 1958, the members of the 5th Republic Senate have had their seats at the Palais du Luxembourg. 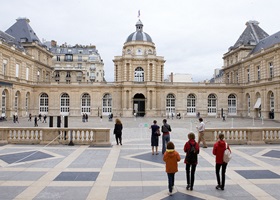 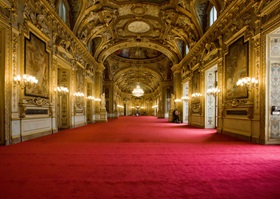 Over the years, the Palais acquired many artistic works of art. It is a jewel set at the heart of the Luxembourg gardens. It is possible nowadays to attend Senate debates and to visit the Palais.