The story of the Palais Royal started in 1629 when the Cardinal de Richelieu (aka Armand Jean du Plessis, 1585-1643) became a State minister under Louis XIII.

He wanted to be closer to the Palais du Louvre and to the king, so he asked architect Lemercier (1585-1654) who designed the Chapelle de la Sorbonne or the Pavillon de l’Horloge du Louvre, to build a hotel for him, which would be called “hôtel de Richelieu”.

The new State minister lived there between 1629 and 1633. In 1633, Richelieu bought the grounds where the wall surrounding Paris built by Charles V used to stand.

Between 1634 and 1639, Richelieu had his hotel enlarged to become a palace, which included a theatre in the southeastern aisle and a huge garden (today known as Jardin du Palais Royal). The “hôtel de Richelieu” became the “Palais-Cardinal”.

In 1636, Richelieu had his will written anticipating the donation of his palace to Louis XIII.
In 1642, when he died, the Palais became Louis XIII’s property and took the name of “Palais Royal”.

In 1643, when Louis XIII died, Anne d’Autriche became regent and moved to the Palais Royal with her two sons, Louis XIV (5 years-old) and Philippe d’Orléans (3 years-old).
Between 1648 and 1654, the “Fronde”, a period of political and social crises, put a strain on the French kingdom. The royal family left the Palais Royal de Paris for the Château de Saint-Germain-en-Laye in January 1650. 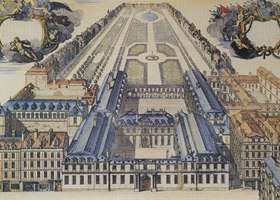 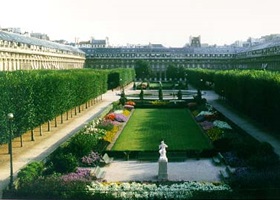 In 1660, Louis XIV decided that the theatre would no longer be private and he opened it to the public. Molière, then director of the king’s troop of comedians, moved there and played almost each one of his works. He fainted and died on that very stage on February 17th 1673, during a representation of the Imaginary Invalid.

In 1692, Louis XIV gave the Palais Royal to Philippe II d’Orléans. When Louis XIV died in 1715, his brother became regent, still lived in the palace. He had some expensive works done and organized many libertine dinners.

Philippe d’Orléans, who would be called later Phillippe-Egalité, great grandson of Philippe II and penniless cousin of Louis XVI, had some arcade porches built. They were finished in 1784, and became shops so that Philippe would rent.

This transformation made the neighbors very angry for they didn’t have a view on the garden anymore. The Palais Royal shops became one of the most animated sites of the capital. They also attracted more than 400 prostitutes, which made them a place of debauchery. 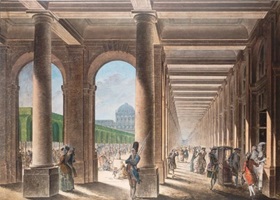 From 1786 to 1790, Philippe Egalité had the “Théâtre Français” built to replace the Opera that had burnt down in 1781.
In 1786, a small meridian cannon in bronze was placed near the Théâtre du Palais Royal. It rang every day at noon to tell the exact time. It is still visible today.

When Philippe Egalité was decapitated in 1793, during the Revolution, the Palais Royal became a national monument.

When the monarchy was restored, Louis XVIII gave the Palais to his cousin Louis-Philippe, eldest son of Philippe Egalité. He had some works done that gave Palais Royal the style it still has nowadays. In 1830, Louis Philippe became king and left Palais Royal for the Tuileries in 1831.

During the 1848 Revolution when the Second Republic was born, the Palais was destroyed and partially burnt. It became a state monument again.

In 1854, Napoléon III took over the Palais and it became home to his uncle Jérôme, Napoléon I’s brother, until his death in 1860.

In 1986, the Ministery of Culture, under Francois Mitterrand’s presidency, gave artist Daniel Buren the task to create a 3,000m2 sculpture in the Cour d’Honneur of the Palais Royal. “Les colonnes de Buren” are now a part of the iconic places in the city.