It was during the 6th century that the Panthéon was born, under the first king of France, Clovis (466-511). Soon after Saint Genevieve, protector of the Parisians against invasions and hunger, died, Clovis decided to build the Basilique des Saints Apôtres on what is now the montagne Sainte-Geneviève.

This religious building entirely made of wood was designed for the coffin of the saint patron of Paris to lie there for eternity. 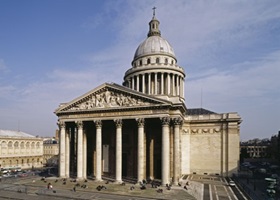 The king wanted the church to become the mausoleum of the Merovingian dynasty, which he started. That reinforced the funeral function of the church.

His body, his wife’s Clothilde and one of their daughters were to lie there also. Historians think that a Roman-style church replaced that first wooden building, but they only have proof of the Gothic church that was destroyed in 1807.

The Catholic Church started to imagine the Panthéon as we know it in 1744. At this time, Louis XV fell seriously ill and made a vow to build a new monument for Saint Genevieve should he be cured.

Since he was cured, Marigny, in charge of royal buildings, chose architect Soufflot (1713-1780, he designed the Temple du Change in Lyon and the Hôtel de la Marine on Place de la Concorde, among others) to design the monumental Eglise Sainte-Geneviève on the mountain that’s called after the same saint. 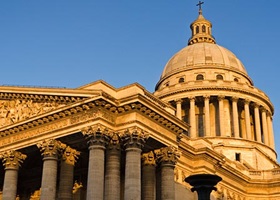 Financed by the gains of a royal lottery, the first stone of the church is set in 1764.

Beyond the unconventional dimensions, Soufflot rehabilitated the architectural style of Antiquity, by using Corinthian columns, a triangular pediment and a columned porch directly inspired from the Pantheon of Agrippa in Roma.

After Soufflot’s death in 1780, his colleague Rondelet (1743-1829), architect and an expert in French architecture, took over the works.

When the Revolution started, the church still wasn’t consecrated. The works were finished in 1790. In 1791, the legislative Assembly decided to change the function of the building and to make it a Panthéon, a lay temple destined to harbor the tombs of France’s great men.

In the 19th century, the Pantheon was a catholic church or a lay temple, depending on the political context.

In 1806, Napoléon had both functions coexist thanks to religious celebrations in the main building and funerals in the crypt.

During the restoration of the Monarchy (1814-1830), under Louis XVIII and Charles X, the monument completely lost its lay purpose to be a church.

In 1830, king Louis-Philippe established the Pantheon as a civic temple again, at the beginning of the Monarchie de Juillet.

Napoléon III was the last monarch to make it a catholic church in 1853.

In 1885, when Victor Hugo died, the 3rd republic (1870-1940) had the Pantheon become the great men’s last place to rest in peace. It still serves this purpose as of today (see painting below).

Among the great men inhumed at the Pantheon, Voltaire, Jean Monnet, Marie and Pierre Curie, Emile Zola and architect Soufflot lie in the crypt.

The dome of the Pantheon is one of the most emblematic architectural parts of the monument. Covered in lead plates, it was an influence for Saint Paul’s cathedral in London. The dome is made of three superimposed stone cupolas. The third one, which is inside, was finished in 1824. A small lantern overtakes them.

Since the works have finished, Paris’ Pantheon had many problems, not being solid enough. In the 19th century, the four pillars that supported the dome were reinforced after cracks started to appear around 1770.

The “pierre armée”, a construction technique which had stones linked together through a metal structure, didn’t age well. Time and humidity provoked corrosion.

Many studies of the monument were made in the 1980’s (X-rays and gamma-rays analysis). A restoration campaign followed. The lead cover of the dome and the high canopies were at the heart of this big project, which ended in 2015. Five phases of renovations will happen until 2022 to give back to this monument its former luster and fortify its structure.