The Pyramide du Louvre was part of a big Louvre project, an idea by former President François Mitterrand.

In September 1981, the President of the Republic announced the restoration of the entire building of the Palais du Louvre to become a museum. 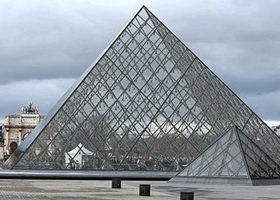 In 1983, the Minister of Culture ordered this huge project, called EPGL (“Etablissement public du grand Louvre”, which means Public establishment of the Grand Louvre). It aimed at conceiving and designing the Louvre and the Tuileries to make them a cultural center, a huge museum. It was nicknamed “Le Grand Louvre”.

To start reorganizing, the Minister of Finances moved out of their traditional location, the Richelieu aisle of the Louvre, into the brand new Bercy building.

Chinese-American architect Ieoh Ming Pei was given the mission to enlarge and modernize the building. He had designed the Eastern aisle of the National Gallery in Washington DC in 1978.

Huge archeological excavations were made in the Napoléon courtyard before taking over the others works of enlargement and the construction of the Pyramide du Louvre.

Pei’s creative style developed between the 1920’s and the 1980’s. His main characteristics are to design buildings in total contrast with past traditions, using steel and glass, and construction techniques from the USA.

Once finished, this huge gorgeous monument was inaugurated on March 30th 1989. The Pyramide du Louvre has a square base of 35,42 m2 for each side, and 21,64 m high. It is composed of 673 glass plates – not 666 like the official brochure announced during construction or as Dan Brown wrote it on the Da Vinci Code. These 603 lozenges and 70 triangles were custom-made for the building. The structure is composed of 182 metal beams, supported by 16 steel cables.

The proportions of the Pyramide du Louvre are very close to the great Pyramid of Gizeh (230 m for each side and 139 m high, see picture above, on the left).

They are four other pyramids in the Louvre: the Pyramide Inversée (the “inverted pyramid”, located under the Carrousel du Louvre, composed of 84 lozenges and 28 triangles), and three mini pyramids (located around the main one, they’re all made of 24 lozenges and 16 triangles).

Historical anecdote: A pyramide was initially suggested to celebrate the 1789 Revolution. A small brochure edited in 1809 had exposed this idea of a pyramid in the Louvre courtyard. It was called “thesis on two great obligations that the French people should do”, written by Bernard François de Balssa, the father of the famous French author Honoré de Balzac. The pyramid according to Balssa would have been a national monument honoring the Emperor. It was built two centuries later.

Professional and amateur photographers can come to the cour Napoléon 24/7.