The Saint-Jacques Tower is an important element of the Parisian landscape. This tower is located in the 4th arrondissement; it is one of the most beautiful testimonies of medieval Paris thanks to its gorgeous Gothic style – the Sainte Chapelle of the Château de Vincennes is the same style.

Built at the beginning of the 16th century, the Tour Saint-Jacques is linked to the evolution and the enlargement of the Saint-Jacques parish, founded just before 1119. 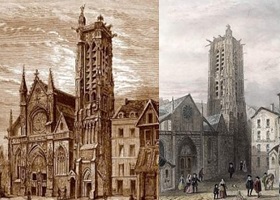 In 1259, this parish became the église Saint-Jacques-de-la-Boucherie thanks to the corporation of the Parisian butchers who were nearby.

In the middle of the 16th century, the powerful brotherhood of the butchers decided to finance the enlargement of the church. The Western façade was finished in 1491, whereas the bell tower, more commonly known as the Saint-Jacques Tower, began in the 16th century.

Built between 1509 and 1523, the bell tower has an impressive architecture and extraordinary dimensions.

The bell tower has a 12-meter square base, and is 54 meters high up to the terrace. It has an intricate ornamentation with gargoyles, finials, pinnacles and statues of saints on the terrace and the sides.

In 1797, during the revolution, the church was sold as a national good and then dismembered like a stone quarry.

The only remain of the church was the bell tower. It was spared because of its scientific interest. Many searchers think that the tower still exists because of the experiments Blaise Pascal made on gravity there in 1647.

The tower miraculously escaped destruction, but it was isolated, surrounded by a wasteland, soon occupied by a junk shop, which became a real market later on.

Later on, the Tour Saint-Jacques was bought back and converted into an English-style lead shot factory. The lead was melted in the top of the tower, and the drops in fusion flew into a basin on the first floor.

The tower was forever damaged by these activities: the vaults and floors of the intermediary stories were destroyed, and the walls were quickly sooty.

In the middle of the 19th century, Baron Haussmann, Napoléon III’s prefect, designed a more modern city, made of large boulevards and green spaces.

Between 1852, when the works were authorized legally, and 1870, when Haussmann was fired because he caused a financial hole with two loans of 250,000 and 260,000 million of francs, Haussmann changed the story of the Tour Saint-Jacques, creating the Rue de Rivoli and the Boulevard Sebastopol that cross in front of the monument and its small park.

The park was created to enhance the beauty of the gothic tower, which became the main ornaments on these two streets. The first restoration on the tower since its construction was finalized for the Universal Exhibition in 1855.

The last renovation was organized in three steps, between 2006 and 2009, and allows us to witness the Tour Saint-Jacques as it was in the 16th century.

Since it has reopened, visitors can access the top of the tower and enjoy the unique view. You “just” need to climb 298 stairs (16 stories). Statues decorate the terrace on each side, Saint-Jacques and animals symbolizing the evangelists: Saint John’s eagle, Saint Luke’s bull and Saint Mark’s lion.

Open between mid-July and mid-September.
Open Friday to Sunday.
Guided tour every hour, from 10am to 5pm.