The construction of the Palais de la Cité’s Sainte-Chapelle, which would later become the Palais de Justice, started in the 13th century with the impulse of Louis IX (Saint Louis, 1214-1270).

Located on the Île de la Cité, the historical heart of Paris, the building was supposed to have the Crucifixion relics. Saint Louis bought from the Venetians the crown of thorns for 135 000 pounds (it had been pawned by Pope Baudouin after the 4th crusade) and fragments of the holy cross in 1241. 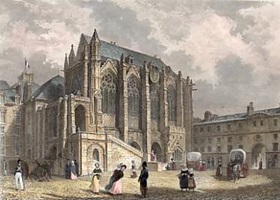 Building the Sainte-Chapelle is not only an act of piety; it is also a political act, which helped him establish himself as the hand of God.

Historians had difficulty determining who had designed this architectural medieval work of art.

They usually think about Pierre de Montreuil, the architect of the monastic buildings in Saint-Germain-des-Prés and the southern aisle of the Notre Dame de Paris’ transept, or Robert de Luzarches and Thomas de Cormont, who designed the Chapelle de la Vierge in Amiens.

We still don’t know when exactly the building started, though many research prove it was between 1241 and 1243.

The building is a traditional palatine chapel, being 33 meters long and 10,70 meters large. The low chapel is for the Palais’ staff, whereas the relics are in the high chapel. A huge cage of glass and metal supports it.

The 600 m2 of stained glass are 2/3 authentic. They represent one of the most complete remarkable works of this time.

The building was built in the center of the Parisian palace and is directly linked to the royal apartments through a roofed gallery. It is one the highest buiding after Notre Dames since it culminates at 33 meters. The Sainte-Chapelle and the Cathedral overlooked Paris in the middle Age.

This huge reliquary was consecrated on April 26th 1248. It was probably finished at that point.

The Sainte-Chapelle resisted fire twice (1630 and 1777), flood once and the revolution, during which the outer ornaments and the lily spire, symbol of the royalty, were destroyed.

In the 19th century, architect Félix Duban was in charge of its restoration, starting in 1836.
In 1848, Jean-Baptiste Lassus took charge of the works. In 1849, he built down the southern staircase and he built a spire similar to the one from 1383 in 1853. He let Emile Boeswillwald finish the interior decoration.

The last renovations were in 1999, when the stained glass was damaged because of a violent storm.