The Statue of Liberty in Paris is the miniature replica of the original sculpture in New York, named “Liberty leading the people”.

The story of this statue started in 1866, when Laboulaye, a French politician, gave young sculptor Frédéric Auguste Bartholdi (1834-1904) the mission to build a monument celebrating the friendship between France and the United States.

In 1870, Napoléon III lost the war against Prussia and gave away the region Alsace, part of Lorraine and 5 million of golden Francs to the enemy.

Politically isolated, France, now under the III Republic (1870-1940), decided to tighten their bond with the United States by creating the French-American union.

In 1873, Adolphe Thiers, president of the Republic, asked Bartholdi to continue the construction of the Statue.

The project of the Statue of Liberty was more than ever on the news to commemorate the 100th anniversary of the Independence of the United States on July 4th 1876.

Bartholdi received a huge funding and decided to move to the 25 rue de Chazelles, Paris, to work on the statue with Eugène Viollet le Duc (known for his restoration works on Notre-Dame and the Sainte-Chapelle). 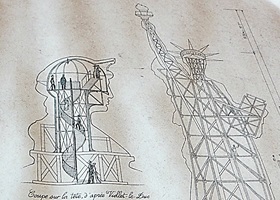 To build the statue, he chose the repoussé technique. It’s a metalworking technique, which consists in working on the reverse of the metal to form a raised design on the front.

The architect had to measure each one of the 9,000 measures necessary for each section. Each definitive section was cast in plaster. Around them, a wooden mold was created, upon which the copper coating was built.

Bartholdi soon realized his sculpture wouldn’t be finished for the centenary of Independence. He sent the torch, which came soon after the celebration.

In 1880, when architect Viollet-le-Duc died, Gustave Eiffel accepted to take over his work. He decided to make the statue rest on a pylon made of four steel pillars to form a tower. That way, the pylon remained different from the copper coating. 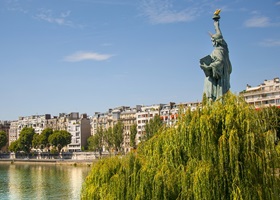 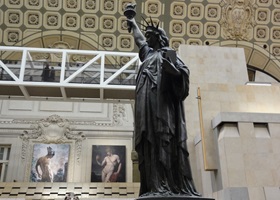 The statue was finished in July 1884. It was dismantled in January 1885 in direction of Le Havre. In October 1886, it was reassembled on Liberty Island, right in the middle of the New York Bay.

Bartholdi inaugurated the statue on October 28th 1886. He climbed on top of the torch, and then unveiled the statue’s face, revealing it to the world.

Its French replica, the Statue of Liberty of Paris, is located on the île aux Cygnes in the west of the city. It is 1/4th the size of the New York statue: 11,50 meters high. French residents of the United States offered it to Parisians in 1889. You can see it from the quays, it offers a beautiful view of the Seine and the Eiffel Tower.

Information: Originally in front of the Elysée, the Statue of Liberty was relocated facing the west – and the USA – on the île aux Cygnes in 1937 during the Universal Exhibition. Two other replicas are in Paris: one in the Musée d’Orsay (the original replica given by Bartholdi to the Musée du Luxembourg in 1900) and one in the Jardin du Luxembourg (a copy to replace the replica, which is in the Musée d’Orsay since 2012).