This small Arc de Triomphe du Carrousel of Paris was a wish of Napoléon’s. Construction began in 1806. It was built to commemorate Napoléon’s victories of 1805 against Austria. It was finished in 1808. It is twice as small as the Arc de triomphe located on Place de l’Etoile (15 metres high, 17,6 meters wide, 7 meters deep).

You can visit it from inside the Cour du Louvre, between the glass pyramids design by architect Leoh Ming Pei, and the Luxembourg garden. This gorgeous monument is directly derivative of the Roman Arc de triomphe erected at the feet of the Capitol Hill in honor of the victories of Septimus Severus, Roman Emperor between 193 and 211 after JC. 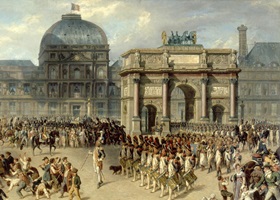 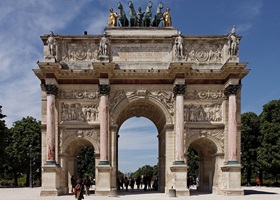 The Arc de Triomphe du Carrousel of Paris was originally surmounted by the famous horses of Saint Mark's Cathedral in Venice, which had been captured in 1798 by Napoleon and ceded in 1815. The horses of Saint Mark were replaced in 1828 by a quadriga, which is a horse-drawn cart representing triumph. It was sculpted by Bosio and is composed of two goddesses symbolizing the Bourbon dynasty restauration.

The view from the top of the Arc de triomphe du Carrousel of Paris is gorgeous. You can see the Tuileries garden, the Obélisque on place de la Concorde, the Champs-Elysées avenue, the Arc de Triomphe and the Arche de la Défense. It’s a very romantic and picturesque view when the sun sets during summer. 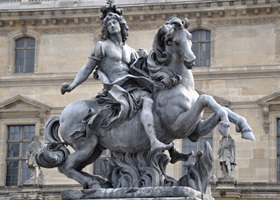 In the inner courtyard of the Louvre, you can admire a statue of Louis XIV riding a horse which is derivative of a marble statue from famous Italian artist Bernini (1598-1680) whose most famous art is exposed in Rome’s Villa Borghese.