The Arènes de Lutèce are among the most important remains from the Gallo-Roman era in Paris, known in Antiquity as Lutetia, or Lutèce in French. This amphitheatre was built between the first century and the end of the second century when the Romans ruled Lutetia.

The Arènes de Lutèce of Paris were 132 metres long, 100 metres wide and could sit more than 15,000 people. The stage allowed scenes to alternate between theatre and combat between gladiators, wildcats – you can see the cages below – and other circus games. 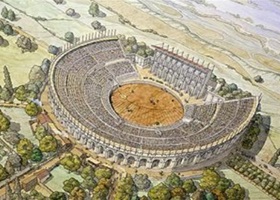 The Arènes were visible until the King Philippe Auguste’s reign in the twelth century before disappearing under the rubble. The historical site was rediscovered in 1869, but the southern part was unveiled between 1883 and 1885 when the Compagnie Générale des Omnibus dug in the ground to build a depot.

Several intellectuals, such as Victor Hugo, rose against the threat of the site’s destruction. They defended the historical structure by asking the Mairie de Paris to take over the ground to conserve the arenas. They are now officially classified as historical monuments.

They were renovated in 1918 after the first World War, and the whole site is now part of a romantic garden. You can admire the actors’ lodge, parts of the scene and other remains.

‘‘The arenas are the antique marks of the city. They are a unique monument.’’
Victor Hugo