The Arc de Triomphe of Paris was commissioned in 1806 after the victory at Austerlitz by Emperor Napoleon to neoclassical architect Chalgrin (1739- 1811). Located in the west of Paris, it wasn’t completed until 1836, under the reign of King Louis Philippe. It represents numerous battle scenes that glorify the French imperial army.

During this same time period, a French architect of German descent named Hittorf (1792-1862) redesigned the facades of the buildings around the place to create a sense of harmony.

In 1882, the Triomphe de la Révolution ("the triumph of the Revolution"), a monumental sculpture by Falguière, was erected on the top of the Arc de Triomphe before falling to ruins four years later. It represented four horse-drawn carts that crashed "despotism" and "anarchy").

The first scene is the most beautiful one sculpted on the Arc de Triomphe. Located on the right pilar when you go up the Champs Elysées:Le départ des Volontaires en 1792 (the Volunteers’ departure in 1792):it stands for the nation guiding the people to defend their independence. It’s also commonly known as ‘‘La Marseillaise’’, as the French hymn.

The second scene, just above the first one, represents Général Marceau’s funeral (1769-1796). This revolutionnary general, who came from small bourgeoisie, won a few great battles before being defeated in Alterkirchen where he was protecting the French troups retreating from Austrians. As he died young in combat, Marceau was honored by his enemies and regreted by his army.

The left pillar represents the Triumph scene of 1810 celebrating the Vienna treaty. After a bad defeat at the Wagram battle, Austria was threatened by the Polish troups and asked for armistice on July 10th. France imposed severe peace conditions: that they recognize Napoléon’s conquests in other nations, that they name him King of Spain and that they join the blocus against England.

The fourth scene, above the Vienna treaty, represents Aboukir’s battle. It happened on July 25th 1799 between the French oriental army and the ottoman Turks in Egypt. General Napoléon Bonaparte is represented winning a battle against the Ottoman empire, an ally of the British empire.

The sixth scene, called La paix (peace), is the left pilar facing Avenue de la Grande Armée. Made by Antoine Étex in 1815, it stands for the end of Napoléon’s attempts at returning to the throne during the period of the "100 days".

Above this is the seventh scene representing Alexandria’s take. Taking over Alexandria was the first operation during the Egypt expedition. On July 2nd 1798, the French army arrives and takes over Alexandria’s place, defeating the Turk military. 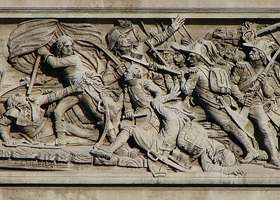 The eighth scene, on the right pillar, is called Résistance (Resistance). In 1814, Russian and Austrian troops invaded France and occupied Paris. This sculpture symbolizes the nation’s resistance against foreign armies allied against Napoléon.

The nineth scene, above Résistance, is Le Passage du Pont d’Arcole (crossing over the Pont d’Arcole). This battle happened from November 15th to 17th 1796 during the first Italy campaign. 19,000 soldiers from the French military fought under Napoléon’s orders against 24,000 Austrian soldiers. The French won thanks to a trick imagined by Napoléon: he asked his drums to walk all the way around the Austrian army and take them from the rear to make them believe that reinforcement had arrived. The Austrian military reduced the number of gards at the bridge of Arcole which allowed the French to cross it. This victory allowed Napoléon to have solid grounds in Italy.

The tenth scene takes the entire width of the Arc facing the Avenue de Wagram. It represents the Austerlitz battle (aka the Battle of the three Emperors) which took place in 1805 in what is now the Czec Republic. After a nine-hour battle, Napoléon’s army won over François II Austrian military and Russian emperor Alexandre I. Beyond its strategic importance, it was a tactical masterpiece which is still taught in many military schools.

The names of the military leaders are engraved on the inner façades of the arches. The names of those who died on the battlefield are underlined. For those of you fond of picture-taking, it’s worth coming at 6.30pm: every night the flame of the Unknown Soldier is lit up.