The Château de Vincennes originally was a medieval manor. In 1178, during the reign of king Louis VII (1137-1180, it served as residence for the royal family, so it must have been built as of the middle of the 12th century.

Located to the east of Paris, in what is now the close suburb of Vincennes, the château served as a second residence to Saint Louis (1226-1270). It served as such until the end of the 14th century and was renovated and enlarged many times. 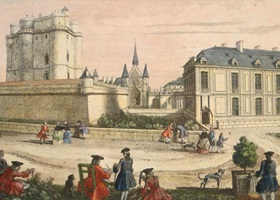 Between 1361 and 1380, the château became a real fortress under the reign of Charles V: the dungeon, the circuit of walls and the two towers were built.

The dungeon is the most striking part of the castle from outside. It’s the tallest medieval fortified structure in Europe, with 6 floors and a terrace that culminate at more than 50 meters high.
It was initially designed for combat: the base of 16,2 square meters, a square room which sides are 9,72 meters long on each floor and 3,26 meters-thick walls. Each angle of this huge dungeon has a circular tower with a diameter of 13 meters.

The circuit of walls is 1,200 meters long. The nine towers, which were originally 40 to 42 meters high, were surrounded by a wide moat filled with water until the end of the 17th century. It used to be 11 meters deep (now 7 m) and filled with the sources harnessed from Montreuil, as well as with rain and used water harnessed from a sewer system from the enceinte. 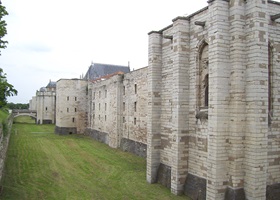 The Pavillon du Roi was built under Louis XI (1461-1483), who wanted to get away from the king’s apartment in the dungeon. He had this pavilion built in the southwestern angle of the enceinte. It was renovated under François Ier’s reign (1515-1547).

Architect Louis Le Vau began the first renovation works. From 1656 to 1658, very ambitious works completed what was first done. Louis XIV wanted to make the Château de Vincennes his first home. The pavillon de la Reine was built in perfect symmetry to the pavillon du Roi in the southeastern angle of the enceinte.

The Sainte-Chapelle de Vincennes was founded in 1379. Its construction began right before the death of Charles V in 1380. It was inaugurated in 1552 under Henri II’s reign, after a long period of interruption at the beginning of the 15th century.
Made and hung in 1555-1556 by famous glassworker Nicolas Beaurain, the stained-glass windows of the chorus are now historical landmarks. Made after the Second World War; the nave’s stained-glass windows were partially destroyed during the 1999 storm. The Sainte-Chapelle has been a historical landmark since 1853.

The Sainte-Chapelle was designed to house some of the Passion holy relics, like the Palais de la Cité in Paris. By doing so, Charles V was trying to make Vincennes a second capital. 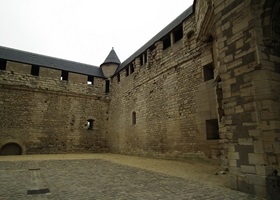 The former Manoir Capétien was built in the middle of the 12th century, under Louis VII’s reign (1137-1180). Nothing was left of this part of the castle until searches began in 1991. Walls of this first royal residence were excavated, some of them dating back from the 12th century.

Between 1992 and 1996, important archeological searches were led to excavate the western part of the royal medieval manor. Architectural elements from the 13th century, 14th century tile were discovered, revealing important information on Saint Louis’ manor.