One of the most frequent visitors was Père Lachaise (father Lachaise) who gave a very generous donation in 1682 in order to rebuild the house. 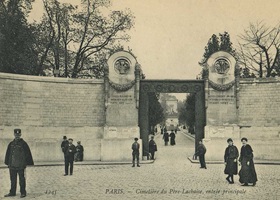 After the Jesuits were evicted, the city of Paris bought these lands to build a cemetery designed by architect Brongniart (1739-1803) who is known for designing the famous Palais Brongniard, also named Palais de la Bourse in Paris.

When it opened in 1804, most Parisians thought the cemetery was too far from the city, so in 1817, the mayor decided to move Molière’s tomb, as well as famous writer La Fontaine’s and medieval lovers Héloïse and Abbelard to make the place more attractive. 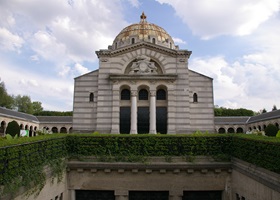 As years went by, many famous persons were buried there, such as Jim Morrison, Oscar Wilde, Balzac, Proust, or Chopin.

The Cimetière du Père Lachaise owes its success to its beautiful garden. 3 million visitors come to admire what’s become the most beautiful and largest garden in Paris. 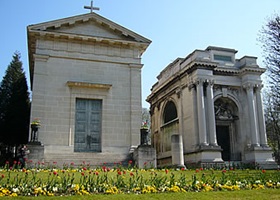 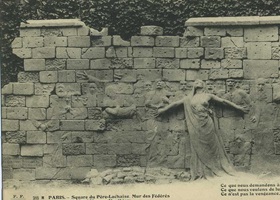 Here’s a list of what you shouldn’t miss:
The Mur des Fédérés: also known as the Cummunards’ Wall is the site where 147 communards, the last defenders of the workers’ district of Belleville, were shot on May 28th 1871, the last day of Bloody Week is pictured on the painted on the left below, and seen on the picture on the right bottom of the wall.
The Chapelle: this chapel was erected in 1823 by architect Godde (1781-1869) at the exact same place of the ancient Jesuit house.
The Porte du boulevard Ménilmontant: was built by Godde in 1825.
The Crematorium is the first of neo-byzantine style. It was built in 1886-1887 (see pic. in the middle, on the right).
The Monument aux morts, dedicated to all the dead, sculpted by Bartholomé lies an ossuary of the bones of Parisians from cemeteries all over the cities. It was opened in 1899 after 12 years of work.
Héloise and Abélard’s tombs, as well as Molière’s and La Fontaine’s.