The plan for the Cirque d’Hiver (Winter Circus in French) started at the end of the 19th century . The guiding entrepreneur was Louis Dejean, who ran the Cirque d’Été on the Champs-Élysées. He wanted to build a second circus and chose the Boulevard du Temple, knicknamed Crime Boulevard at the time.

The Cirque d’Hiver was granted the right to build on December 17th 1851. Jacques Ignace Hittorf designed the building and began the works of the Cirque d’Hiver. They lasted 8 months. 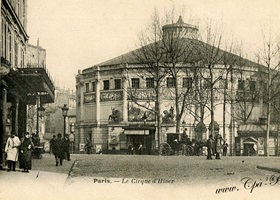 December 11th 1852, Prince Louis-Napoléon, who was to become Napoléon III, unveiled the Cirque d’Hiver. The monument was renamed Cirque Napoléon in compliment to the future Emperor. The circus is an oval polygon of 20 sides, 40 windows, with a diameter of 42 meters. It’s lit up by 21 gas chandeliers.

It used to sit 5,900 people, but can only accomodate 2,000 spectators now because of recent security legislation.

The circus quickly became the temple of entertainment. The painters and sculptors of the time were called upon for inner and outer designs (Pradier, Bosio, Gosse, Barrias).

The circus was first devoted to equestrian performances. Famous riders of the 19th century such as Franconi or Baucher (French rider who was known as the master of "reasonable horseriding") administered the Cirque Napoléon. 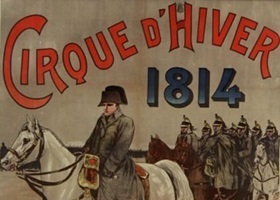 Timeline:
1859: Léotard, a famous trapeze artist from Toulouse, invented the art of the flying trapeze.
1870: The Cirque Napoléon became the Cirque National, and then was renamed Cirque d’Hiver in 1873.
1934: The four brother Bouglione took over the Cirque d’Hiver and added elephants, lions, tigers, cannonwomen and wresting games to the show.