The Église de La Madeleine (or Madeleine church) was initially intended to be a part of a global urbanisation plan of the western quarters of Paris.

It was located where the first Gothic sanctuary — Ville L’évêque — was built in the 12th century. 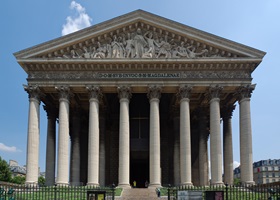 The Église de La Madeleine was named after Saint Mary-Magdalene (Marie-Madeleine in French), when king Charles VII had a brotherhood dedicated to her inhabit the old sanctuary. He had the whole building remade.

In 1722, buildings were built in Faubourg Saint-Honoré, and Ville l’évêque was reattached to the city of Paris, making the old sanctuary too small. The rebuilding the church became official in 1757.

Pierre Contant d’Ivry (1698-1777), architect of the Duc d’Orléans, designed a latin cross-shaped church, with a small dome. The first stone was set by Louis XV in 1763. As the foundations rose, the architect died before it was finished in 1777.

He was replaced by one of his students, Guillaume-Martin Couture, who remodeled the original plans.

He designed an orthodox-cross-shaped church with a bigger dome, a portico and a Corinthian peristyle (a columned porch surrounding the court). He was inspired by the Sainte-Geneviève church designed by Soufflot - which was renamed Panthéon in 1791. 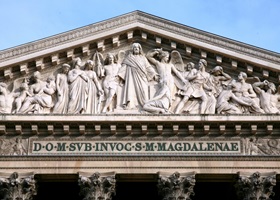 In 1789, at the start of the French revolution, only the foundations and the grand portico were finished. (see image above) At that time, religious buildings were not popular which enticed the National Assembly to stop the works with a decree between 1791 and 1804.

In December 1806, another decree signed by Napoléon I relaunched the construction. He wanted a monument in honor of the French army.

Architect Pierre-Alexandre Vignon was commissioned to make new plans: he built his design on an antique temple, preserving the standing columns, and work began anew. The façade was directly inspired by the Olympieon, Zeus’ temple in Athens.

Works went quickly but stopped again in 1811, as funds ran out. In 1812, after the Russian war campaigns, Napoléon set aside his commemoration project and went back to building a church.

After the fall of the empire in 1814, during the "Restoration" of the monarchy until the 1830 revolution, King Louis XVII and then Charles X came back to the throne. The works were almost finished, only the roof and the decoration were left to complete.

As the last king of France, Louis Philippe considered transforming the building into a railway station until he set his mind on a church, again.

Commissioned before the 1830 revolution, architect Jean-Jacques Marie Huvé took over the end of the works and the interior design after Vignon’s death in 1828. He found his inspiration in the baths of Caracalla and Rome’s pantheon.

Many painters and sculptors worked on this wonderful work of art. In 1833, the Last Judgement, sculpted by Philippe Joseph Henri Lemaire, put an end to the facade and completed the colossal style of this church.

In 1845, the Madeleine church was solemnly inaugurated by Monsignore Affre, archbishop of Paris. In 1846, the great organ of Cavaillé-Coll (famous organ maker) was installed. It was originally constituted of 48 organ stops and has now 60 of them, which make for 4,426 pipes!

Under the pediment, there’s a Latin quote : "D.O.M. SVB. INVOCAT S. MAR. MAGDALENAE", which means "To God almighty, invocating Mary Magdalena). This quote invites the visitor to discover Mary Magdalene, holy patron of the church. She appears on the pediment sculpted by Henri Lemaire, in the Last Judgement expressing repentence, kneeling at the right of Jesus Christ.