The "Sun King" commissioned architect Libéral Bruant (1635-1697). He made a true architectural gem which represents perfectly the classical style of the time, with its elegant gilded building and its monumentality. 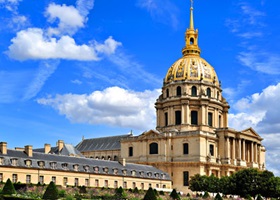 It was meant to be practical and is composed of a barrack, a home for the elder, a convent, a hospital and a manufacture. The Invalides work as a city with its own military and religious rule.

In 1674, the first boarders started to settle, until there were up to 4,000 people living there until the end of the 17th century.

Divided in companies, the veterans were led by officers. The most fit take care of guard duty at the Bastille prison, others are in charge of tapestry or illumination workshops.

The north wall of the Invalides faces the Alexandre III bridge. The decors of this impressive building (195m long, 22m high) wasn’t finished by the time the king died, but the initial plan was carefully followed.

At the heart of the North pavilion, a grand statue of Louis XIV as a Roman imperator is sitting on a grand arch which symbolizes triumph. It is the door to the royal courtyard. The statue was made between 1732 and 1733 by sculptor Coustou. On the sides of this great door are two statues which represent the royal virtues of Justice and Prudence.

Overlooking this front door is a statue of Hercules with the dead Nemean lion lying at his feet. According to the Greek mythology, it was the first monster the hero faced during his legendary twelve works. This work of art is an hommage to Henry IV, Louis XIV’s grandfather, who was frequently associated with the Greek demi-god.

In 1732, two statues of Ares (aka Mars in the Roman mythology), god of war, and Athena (Minerva for the Romans), goddess of war and military strategy, were built on the left and right of the door. They stand for traditionnal war imagery in the Greek and Roman mythologies. At the beginning the 1960’s, the statues were in such bad shape that they were replaced by copies.

Once you cross the northern door, you’ll discover the elegant ‘‘cour d’honneur’’. This gorgeous ‘‘court of honor’’ is surrounded by sixty stone dormers, three-meters high, decorated with military trophies and attributes, except for one of them. The fifth dormer on the right, on the front of the Oriental side. It represented a wolf jumping out of a bush. It is called Louvois, which is a clever French pun refering to François Michel Le Tellier, the secretary of State, marquis de Louvois. He has a major role in the construction of the Invalides. 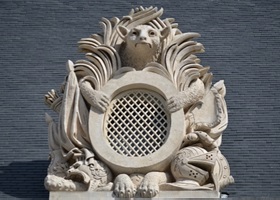 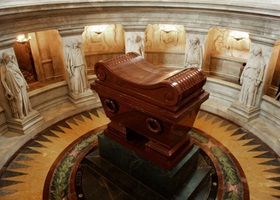 In 1676, Jules Hardouin-Mansart was called by Louvois to build a church, which would be called Saint-Louis des Invalides. The architect extended the nave – which is called Église des soldats nowadays – and built a royal chapel at its end: the église du Dôme.

This gorgeous building, almost square at its base, is made of a terrace surmounted by a dome, supported with a tambour, enlightening the inside of the chapel. The Invalides is structured by a cornice and a series of aligned superposed columns which disposition is modified at every level.

At the entrance of the church, two big Saint Louis et Saint Charlemagne statues welcome the visitors. Once inside, art and history are all around, thanks to the frescos, sculptures, paintings under the dome. Napoléon’s ashes lay there as well. From 1840 to 1861, Napoléon’s tomb (see picture above) was sculpted in red quartzite by architect Visconti, and then placed on a green granite plinth. Twelve Pradier sculptures surround it, standing for Napoléon’s great military victories.

The most impressive part of the monument is the Invalides dome, with the small lantern on top of it, and an arrow with a stylized lily, which used to be the symbol of the French monarchy. The dome is surmounted with a cross and measures up to 101 meters. It was the highest building in Paris until the Eiffel Tower was built in 1889.