Located in the heart of the Latin Quarter, the Grand Mosque of Paris (or "Grande Mosquée de Paris" in french) was built after World War I as a token of gratitude to the 70,000 Muslims from France’s colonial Empire who had fought for the nation.

Following a Spanish-Moor style, the Grand Mosque of Paris was inspired by the Alhambra in Granada (Spain) and the Médersa Bou Inania in Fès (Morocco). Works started in 1922 and lasted four years. 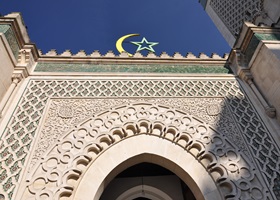 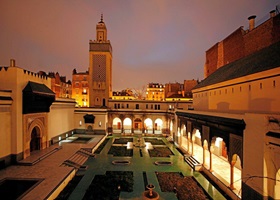 The Mosque’s architecture and mosaic represent both classical and contemporary sides of the Muslim art.

The most impressive element of architecture is the minaret covered in white and green tile. With its 33-meters-high, it overlooks the rest of the building.

From the way it is built and used, the Grande Mosquée de Paris is considered to hold four different sections.

The religious section is composed of the grand patio, the prayer room and the minaret. It is reserved for praying.

The scientific section is composed of a muslim school and a library.

The green space is composed of an arabic garden which is 3,500 sqaure-meters.

The commercial section is composed of a typical moroccan café with a terrace, and a hammam.