The story of the Hôtel de Ville of Paris dates back from the 14th century when the provost-marshall Etienne Marcel bought the first "maison aux piliers " in 1357. It was called that way because it was sustained by huge pilars.

This house was bought to emancipate Paris from the king’s authority, following Flammish cities such as Bruges and Antwerp.

In the 16th century, King Francis I decided to endow the city with a city hall which would be worthy of Paris. He asked the provost-marshall and the country magistrates to start the works in 1533. It was to be built at the same place, but it was supposed to be bigger that the old building. The king asked Domenico da Cortona, an Italian architect, to lead the works.

There were some public trouble due to the works, so they got interrupted quite a lot, and lasted many years. The new city hall was finished in 1628.

It became a symbol and a historical landmark. The first mayor of Paris imposed the tricolor cockade to Louis XVI on July 17th 1789.

This started the insurection movement which led to the fall of the monarchy in 1792, and to the proclamation of the Republic from September 1792 to May 1804. This is where Napoléon I married Marie Louise in 1810. 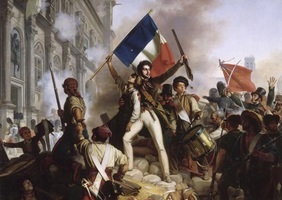 In the 19th century, Louis Philippe wanted to extend the city hall and demanded many works in 1836 to make it easier to walk inside.

When Louis Philippe and Napoléon’s reigns ended, the 2nd and 3rd republic were proclaimed in front of the Hôtel de Ville in 1848 and 1870.

In 1871, during the "bloody week", part of the Parisian population revolted against the 3rd republic. The people took over the Hôtel de Ville but was seriously counter-attacked by the republican troops. They burnt the building in order not to admit defeat.

The city council had it re-built it between 1873 and 1882 by architects Deperthes and Ballu, following the former building’s plans.

Still accounted for on the place de l’Hôtel de Ville, the city hall is a wonder to look at, with its neo-Renaissance style, its ballroom inspired by the famous Galerie des Glaces in Versailles and its 136 historical statues of Voltaire, Colbert, Molière etc .

The Hôtel de Ville of Paris is now occupied by the Mayor of Paris and the city council. The Place is often used for political and popular celebrations (concerts, sports games broadcasts, ice-rank and other events).